share this
Understanding the interactions that occur in the contact patch – the small space where the wheel meets the rail – is essential to give customers a safe and reliable railway. 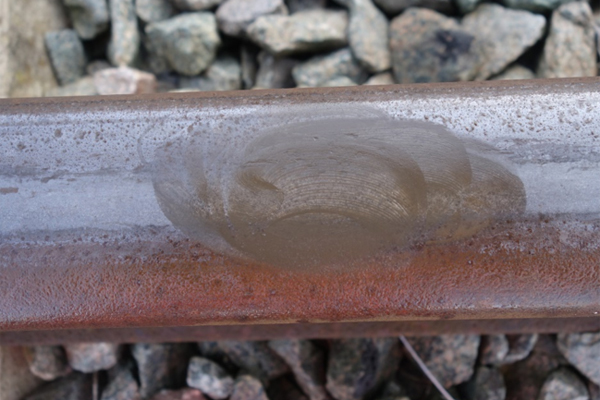 Adhesion at the interface between the wheel and the rail is affected by a third body layer in the contact patch, which is composed of steel wear debris and iron oxides, and often contains other contaminants such as organic matter, ballast dust and grease. Environmental conditions – such as temperature, precipitation and humidity – affect the properties of this third body which in turn affects adhesion conditions on the railway. RSSB has funded three PhD projects at the University of Sheffield to explore these interactions in detail.

A “wet-rail” phenomenon - where there is no visible contamination on the railhead - can cause low adhesion throughout the year and is thought to be produced by low levels of water on the railhead caused by dew, mist or light rain. Research completed in 2018 has demonstrated that a combination of iron oxides and water can cause low adhesion in a simulated wheel-rail contact patch. Going forward, the test methods that were designed to simulate the wet-rail phenomenon can be used to better understand the causes of low adhesion and to test future mitigation methods.

Low adhesion conditions in autumn are typically caused by layers of leaf film that build up on the railhead. As part of our commitment to addressing the ‘leaves on the line’ problem, we have reviewed existing research into the biochemistry of leaf film on the railhead and examined the solutions that other industries use to deal with challenges associated with the degradation of plant matter. We are also funding PhD research into the detailed processes involved in leaf film formation and bonding to the railhead; how leaf film affects wheel-rail friction under different environmental conditions; the effectiveness of rail surface modification; and, novel mitigation methods. Another PhD is examining how the chemistry of leaves varies between species to inform the development of an improved adhesion index prediction.

Using tribo-chemistry analysis to understand low adhesion in the wheel/rail contact (COF-E14-01)
View on SPARK
See Also
Haven’t found what you’re looking for?
Get in touch with our expert for more information