Featured story12 July 2018
Smart use of data and technology is helping to protect and enhance Britain’s railways’ excellent safety record, according to rail safety body RSSB.

Figures released today confirm train travel remains one of the safest forms of transport, the car being 21 times as risky, the bicycle nearly 350 times and motorcycle nearly 1,400 times. 2017-18 was the eleventh year in a row without a train collision or derailment leading to death of passengers or the workforce. There has also been a fall in the number of accidents that didn’t cause harm but had the potential to do so under different circumstances.

Despite a 1% drop in growth in rail travel in the 2017-18 financial year, RSSB has been keen to stress that over the longer term there has been substantial unanticipated growth, resulting in a railway at or near full capacity, with 1.7 billion passenger journeys made. This puts a lot of pressure on the system in terms of risk.

By collecting and analysing a wide range of safety data, industry is able to target intervention in the right areas where risk can be managed or reduced. This is yielding significant benefits, with reductions in risk of 26% at level crossings, and 11% for derailments since 2014. The risk from signals passed at danger is just a third of what it was in 2006.

However, figures have also revealed adverse performance in other key risk areas including assaults and abuse of both passengers and rail staff, and trespass. Industry has been mobilising fresh programmes and tactics to address these risks, including wearable tech such as body cameras. Staff wearing the cameras suffer less abuse and fewer assaults, as do staff working in the same vicinity but without cameras. A survey of 700 staff, indicated that 94% reported experiencing workplace abuse in the last twelve months, with 30% seeing abuse directed at them daily.

Other programmes are also yielding benefits – the industry recorded 1,700 interventions by rail staff to prevent suicide, thanks to collaboration between Network Rail, train operators and Samaritans, to ensure staff are better briefed, trained and prepared to intervene to help vulnerable people.

'Rail remains one of the very safest forms of transport, a position supported by our analysis of the safety data from across the national rail network in the last year. In particular, in those areas where industry is working together with sustained focus - such as train accidents and level crossings - real, measurable improvements continue to be seen. No one is complacent, and the industry is already mobilising to address those areas where we haven’t seen similar success – such as trespass, assaults and abuse. Rail has a proven blueprint for successful, collaborative, risk management to apply, and emerging technology - such as monitoring systems and wearables - are also providing opportunities for improvement and showing some early signs of success.' 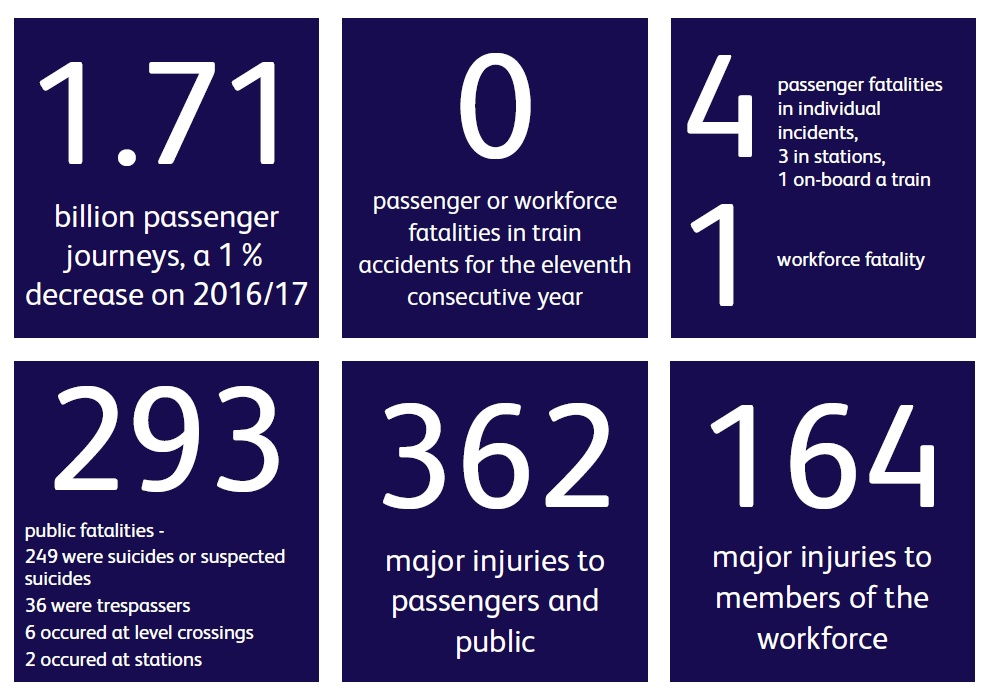 The context is still a busy railway - 1.71 billion passenger journeys, a 1% decrease on 2016/17, but over the longer term there has been unanticipated growth, and the railway is at or near capacity.

Other key points and references

You can find more details about how industry is addressing these risks, and the initiatives they are embarking on, in the latest quarterly report: Leading Health and Safety on Britain’s Railway Progress Report – June 2018.

The full Annual Safety Performance Report is now available to view on the RSSB website.