share this
Demonstrating in service a new approach to sanding to drastically improve braking in low adhesion. 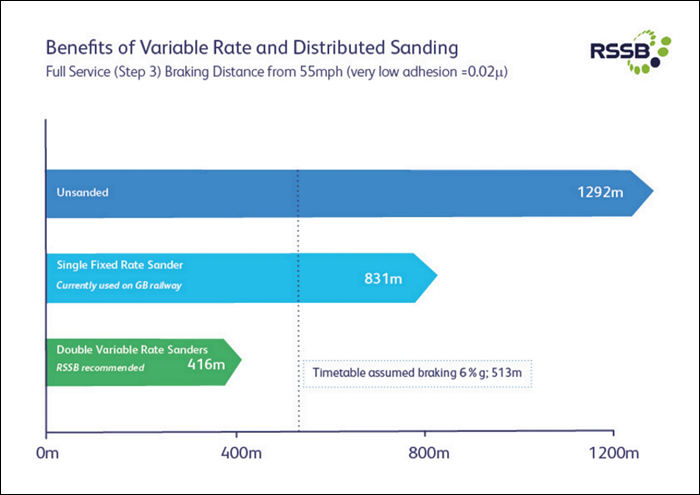 RSSB is now working with West Midlands Trains to pilot enhanced sanders to:

West Midlands Trains has fitted two class 323 trains with double variable rate sanders. These trains were chosen as they work an intensive stopper, metro-style service over the Cross-City line (Birmingham). The leafy nature of this line means services suffer from a performance dip during the autumn period due to low adhesion, making it a perfect candidate to pilot and demonstrate the benefits of this innovative technology.

These retro-fitted enhanced sander trains were introduced to service in late 2019 with the braking performance monitored and compared against unmodified units. If you would like further information on this pilot, please get in touch.

Find out more about results from our double variable rate sanders trials in the video below.

Find out what the testing programme entailed and how we went about simulating low adhesion conditions on Network Rail’s RIDC Melton test track.

Trials of sanders and sand laying rates (T1107) - research brief
View on SPARK
See Also
Haven’t found what you’re looking for?
Get in touch with our expert for more information