Featured story26 February 2021
On 28 February, we remember the Great Heck train crash, 20 years to the day that it happened.

At about 06:13 on Wednesday 28 February 2001, a car crashed down a motorway embankment and on to the East Coast Main Line railway at Great Heck, near Selby. A southbound express passenger train from Newcastle then collided with the car and derailed, which was then collided into by an oncoming northbound freight train.

This was a tragic chain of events, with terrible consequences. Ten people died including the drivers of both trains involved, two members of rail staff, and six passengers. 82 were seriously injured. Our thoughts are with the families and friends of those who died, those who were injured, and those who survived and live with the memory.

The key to preventing accidents is to reduce the risk to as low as it possibly can be without it being impractical. For example, it might be too costly for the benefit you will get, or simply not realistic to do without introducing new risks or problems.

The more barriers you can create to reducing the risk the better. Most of the time, your barriers will work, but very rarely, circumstances will line up and every barrier you put up will be overcome. This is one reason you will never be able to get the risk down to zero, there will always be some risk.

In the case of Great Heck several factors lined up in the most tragic way possible. These include the fatigue of the Land Rover driver, the ability of the Land Rover to overcome the roadside barrier designed to stop vehicles getting on to the railway, the time available to remove the vehicle or stop the trains via signalling, and the crashworthiness of the passenger train.

Understanding how to improve those barriers is the key to helping prevent accidents in future.

There is no hiding from the fact that the car crashing on to the railway set off a chain of events that led to the accident taking place. However, the driver could never have foreseen the chain of events, and is not the first person to have driven on our roads while too tired or sleep-deprived.

In terms of learning from this accident, the biggest learning point is probably about road safety, not rail safety. But rail still learned several key lessons.

The accident led to a better understanding of the risk of road vehicles getting on to the railway.

This was enabled by better cooperation between the railways and the road authorities such as the Highways Agency (now Highways England). Accidents are easier to prevent when you have good data and intelligence, especially about your assets. At the time, very little was known about the bridges over railways and whether they had sufficient barriers and defences to help prevent road vehicles encroachment. The accident prompted a longer-term survey and led to a better understanding of the risk of encroachment, so better targeted investment on defences.

The accident improved understanding of how to make trains stronger and stiffer to increase the chances of survival.

Nobody wants an accident to happen, but it’s important to prepare for the worst-case scenario. The accidents that took place in the late 1990s and early 2000s (like at Ladbroke Grove, Hatfield, Great Heck and later at Ufton Nervet) revealed that people on-board a train involved in an accident were at most fatal risk by being ejected through breakable windows (ironically designed that way to aid escape).

Research by RSSB led to improvement in standards so that modern trains are fitted with laminated glass to prevent ejection and increase the chances of survival. It also ruled out seat belts as laboratory tests with a specially customised ‘crash test dummy’ showed that they actually increase the chances of being seriously hurt or killed.

Other aspects of the way trains are built have been improved as a result of learning from Great Heck and similar accidents, including stronger carriage ends, couplings, and the ability of trains to deflect obstacles.

The railway has learned to focus on its own use of roads.

The rail industry uses roads a great deal, not just for access to the railway, but also to transport rail staff to the right place. While rail workers are at risk of being injured or killed in accidents on the track, the roads also present a huge risk from work-related driving.

The railway has a better view of the risks that roads present, and this is highlighted as one of the 12 key risk areas in the rail industry’s collective health and safety strategy, Leading Health and Safety on Britain’s Railways.

It’s important to remember that the railways are still really safe.

Tragedies like Great Heck are very rare and the railways are extremely safe, and far safer than the roads by comparison.

We saw the train accident at Carmont near Stonehaven in Scotland in August last year where 3 people died. This was the first train accident involving loss of life to passengers or workforce since the Grayrigg accident in 2007.

But nobody is complacent, and there are plenty of risks that still need managing to protect the safety and wellbeing of passengers, the public and the people who work on the railway. This includes the risk of road vehicles encroaching the railway, whether that’s at level crossings, bridges or fences – incidents still happen, thankfully without the level of consequence that occurred at Great Heck.

We remember the 10 people who died at Great Heck. 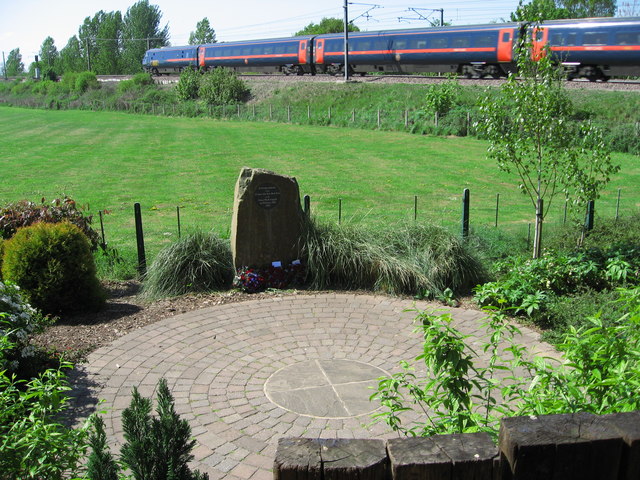 The image of the Great Heck memorial garden is by Oxana Maher and appears by Creative Commons Licence, CC BY-SA 2.0

The four who were from the railway workforce were:

The six passengers were:

You can read more about what happened at Great Heck in an article by RSSB’s Operational Feedback Lead, Greg Morse, in RAIL magazine (edition 925).

Haven’t found what you’re looking for?
Get in touch with our Director of System Safety and Health for more information.