share this
Like all organisations with over 250 employees, RSSB is required to report and publish information about gender pay difference.

At RSSB, we are committed to equality, diversity and inclusion. We have gone beyond the legal requirements of reporting on the pay gap for our Black Asian Minority Ethnic (B.A.M.E) employees. This is because we believe raising awareness is the right thing to do for our people, our business and the industry. This year we have published our third report, in which we provide details of our gender and ethnicity pay gap.

RSSB remains committed to reducing the pay gap and we are working with our employees to identify practical ways in which we can do this.

To view our details of our gender and ethnicity pay gap data, please read or download our 2022 Gender & Ethnicity Pay Gap Statement.

RSSB supports the career and development of its staff. Meet some of the women who work in our key technical and engineering roles to find out what they do. 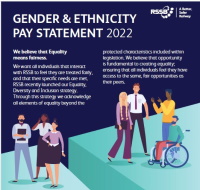 RSSB’s Gender Pay Gap Statement - 2018
Download
View less
View all
Haven’t found what you’re looking for?
Get in touch with our expert for more information