Lifelong Learning is Important... but What is it's Business Case and Who Pays for it?

Featured story19 March 2018
Lots of training and development happens in the rail industry. The green light for it often comes based on a business case; but during and after the training very little effort is put into identifying and quantifying the benefit. Very often the only evaluation is some analysis of the feedback forms handed out at the end of the training and perhaps some discussion with line managers. Even when there is a formal assessment, it is not always clear what the training and development benefits are for both employers and employees.

It would seem important to have a better understanding of the impact of training, if nothing else, to provide the right incentives, but there is still a lot of uncertainty and confusion in both the methodology and the numbers. As pointed out in one of our previous articles, there are substantial "intangibles" which rail companies struggle to include in the business case and even when they do, they are unlikely to sway the financial case or persuade the sceptics.

This is not a rail specific problem. Half of 1,400 executives worldwide who participated in the 2014 McKinsey survey on building capabilities told that their biggest challenge with training programmes was the lack of effective metrics. Only 13% told that their companies tried to quantify the financial return on training and almost 20% said that their organisations did not even bother, leaving HR departments flying blind about their impact.

Well established ways to assess the value of training

Training like any other business activity requires time, energy and money. Companies need to know whether their investment is effective and, particularly when profits are under challenge, they are not willing to spend money on faith. The Kirkpatrick Four-Level Evaluation model was developed in the late 1950s and still covers the basics of training evaluation in a simple and sound way. 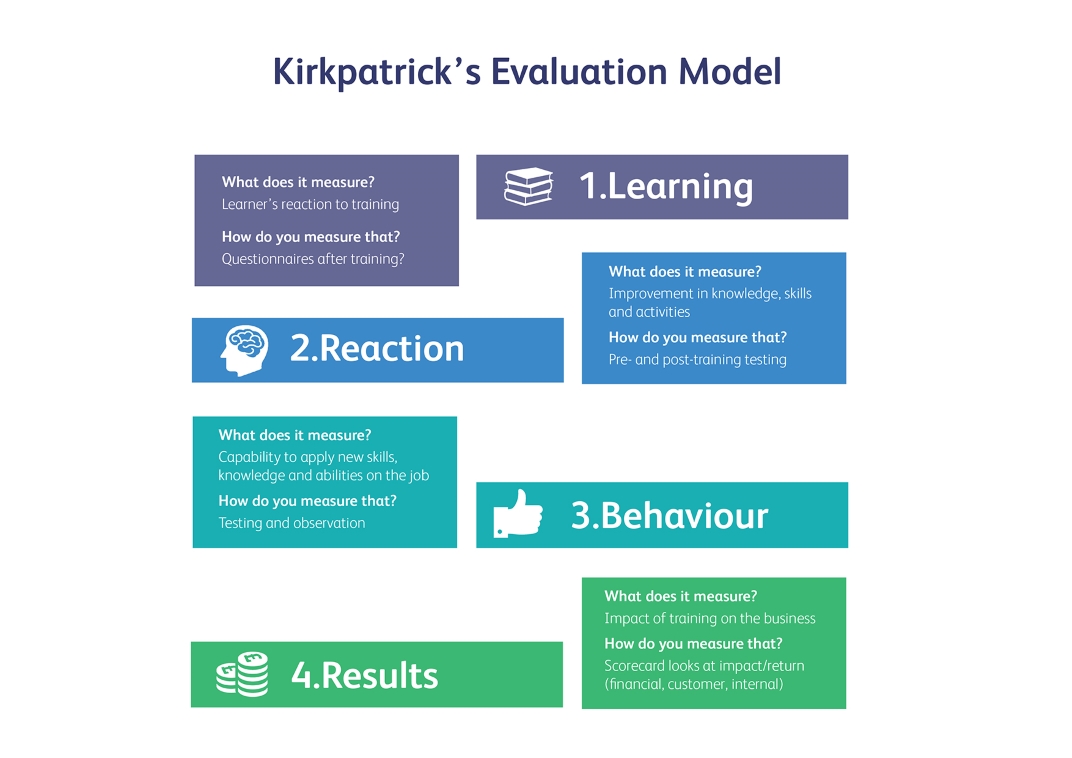 However, the Kirkpatrick model doesn't provide a magic tool that translates changes to behaviours into quantifiable benefits. Also, this model is focused on measuring the effectiveness of training providers (level 1 and 2) and the company gains (level 3 and 4).

Are such evaluation models fit for lifelong learning?

There are societal, demographic and technological changes currently transforming the workplace and making lifelong learning essential.

Employers now have access through the 'gig economy' enablers and crowdsourcing platforms to a pool of external talent at a reduced cost. Online labour platforms allow companies to source work from freelancers on an on-demand basis. This phenomenon grew 26% globally over the past year alone. 37% of UK businesses already recruit most of their new hires on a temporary or on a project basis, according to a recent survey by Oracle, and 50% plan to take on more temporary workers by 2020. According to Deloitte, almost half of executives expect to increase or significantly increase the use of gig economy workers in the next three to five years. It is clear that the gig economy is here to stay. This raises questions on the employers' incentives to invest in their gig-workforce's career development. It also implies that employees have themselves greater incentives to invest in their own development and influence the training they receive.

The working population aged between 50 and the state pension age will increase from 26% in 2012 to 35% in 2050 – an increase of approximately 8 million people. In rail, the combination of an ageing workforce and the difficulty in attracting the overall smaller pool of young graduates and talents, means that current workers will have to pick up new skills throughout their career.

The pace of technological progress and its impact on jobs and tasks has been looked at in our last series. With new skills and new tasks being required at a growing rate from employers to have the competitive edge and for employees to remain employable, there is a strong argument for lifelong learning and job matching.

These three trends call for lifelong learning to deliver key benefit for individuals, businesses and the state. Traditionally, to invest and provide adequate training to workers has been the responsibility of the employer, but the fact that the employees are increasingly going to benefit from lifelong learning, requires all to embrace a different mindset and use different evaluation tools to revisit the principles behind who pays for training and development, and why.

Balance between state, businesses and individuals

So, at present who spends most on developing skills of the UK working age population – government, employers or individuals? 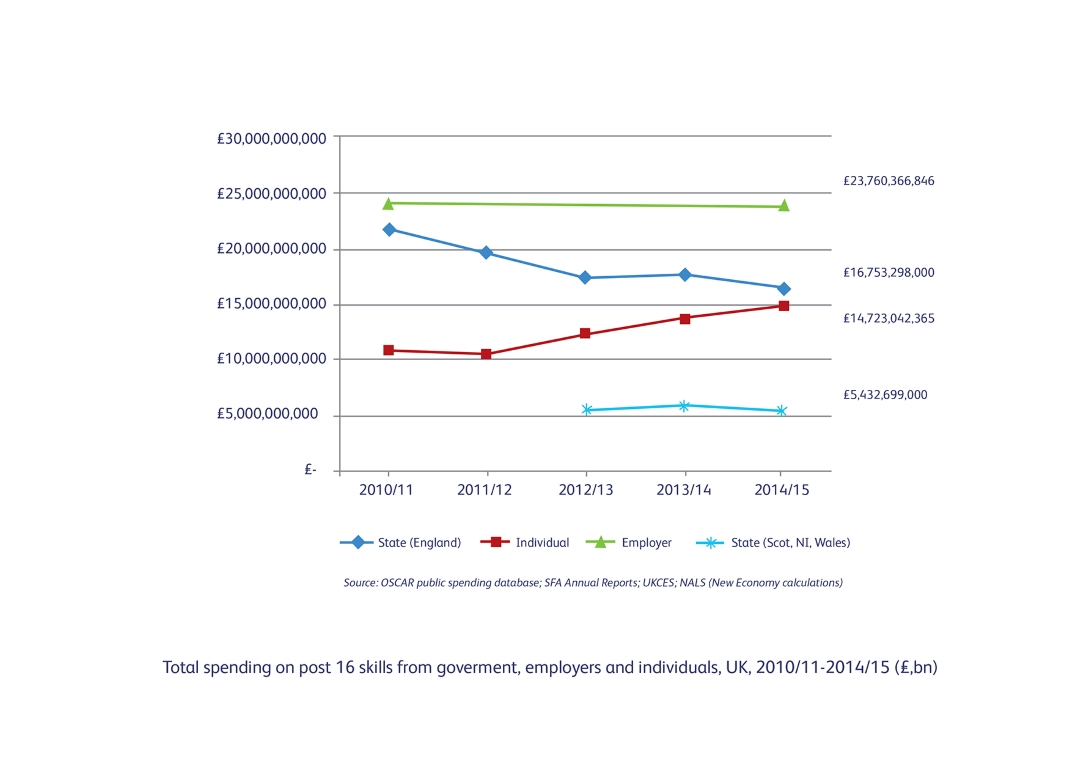 In 2017, the Greater Manchester Combined Authority (GMCA) conducted an economic study on the investment in skills. As shown on the graph, the report points unsurprisingly to employers being the main investors. Individual investment has grown over the last years as state spending has retreated, while employer investment has held steady overall. Other noteworthy trends within these spending patterns include the growing investment from employers on management training, and the overall reduction of training cost per person.

While individuals invest more in the development of their skills, this investment seems to have a psychological limit. A national survey by the Department for Business, Innovation and Skills which was published in 2012 found that 58% of respondents (all ages) viewed cost as an obstacle to learning. It also found that moderate fees up to £200 do not impact on learning, but an increase to £2000 however significantly impacts on the willingness to learn, and similarly found that an increase from a few hours a day to 2 days a week has a major impact on people's decisions. 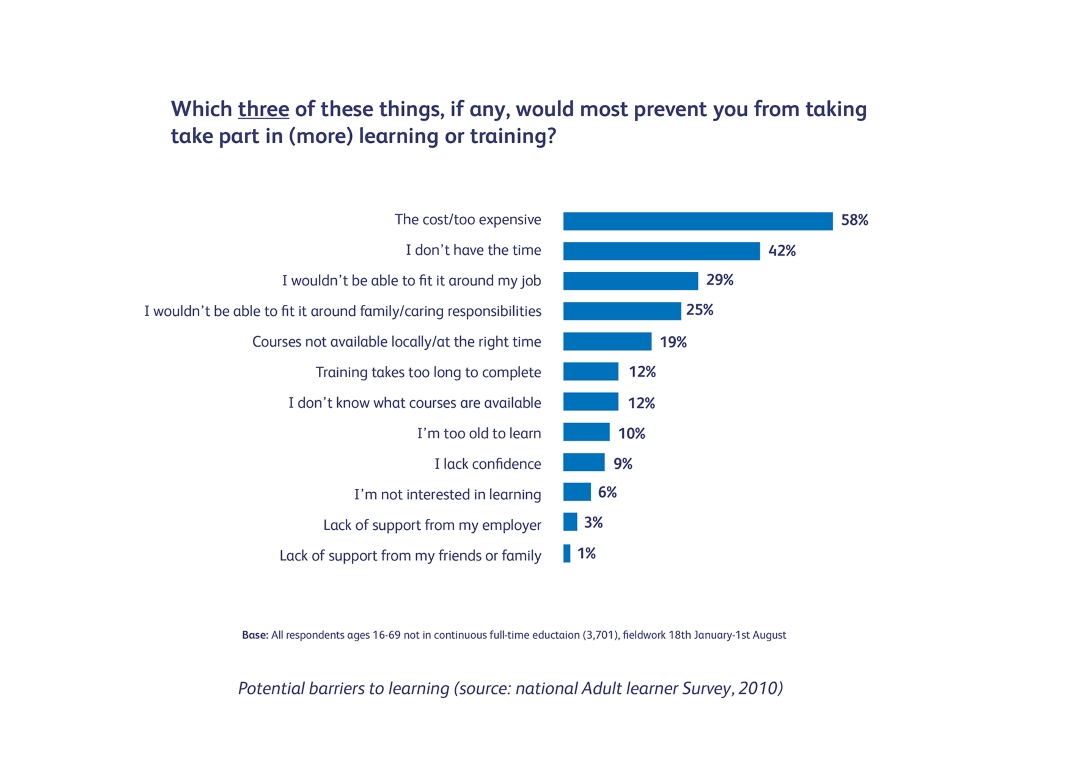 Incentives to study also depend on education level and age. Assuming more employees need to re-skill themselves from their own pocket, a deciding factor would be to know at what point re-skilling 'stops paying'.

Although not a definitive answer, the 2017 GMCA economic study sheds some light on the breakeven point using UK Labour Force Survey data (Jan-Mar 2016, Office for National Statistics). Employees have stronger incentives to study for a qualification when they're young, as they would comparatively incur 'wage penalties' (earn less than peers with similar qualification) if undertaking these studies at a later age. Older employees seem to have a further disincentive to upskill as the salary gap with same age unqualified but experienced workers seem to shrink.

Indeed, a government foresight report on the future of an ageing population in 2016 confirms that those aged 50 and over are less likely to take part in workplace training, seek work-related training and to be offered it than their younger colleagues, although improving their participation in learning could enhance later life productivity and build mental capital and resilience.  These are factors that wider societal business cases need to take into account.

How do we manage incentives and expectations going forward?

First rail, as other industries, needs to recognise that it is now time to plan and evaluate development activities on a longer time horizon and in the context of the imperative of lifelong learning.

While there is a greater need for state intervention for older and lower qualified workers to meet lifelong learning challenges of these groups, this cannot be the main and fit-all answer for lifelong learning.

There is the unquestionable need to find a new and workable balance between government, employers and employees' contributions to training and development. In this area new things are being tested and more needs to be trialled. For example a US excavation and engineering company successfully retrained some out-of-work coal miners in coding. The company wanted to revitalise the local economy and at the same time address a 'brain drain' problem. To accomplish both goals, the company worked with the local workforce development agency and identified software development as a profitable industry in which they could expand their business.

In the rail industry, changes to who is responsible and pays for the training will challenge the current psychological contract (unwritten mutual expectations for each side) between employers and employees. This is particularly true for some front-line roles that undergo a long period of training immediately after having been employed. This reinforces expectations and reliance on the traditional approach where employers are in charge of identifying training needs and expected to fully support employees in developing the skills needed to perform. Migrating to a place where employees feel more in charge of needs and opportunities associated with lifelong learning, and are willing to make financial and/or off-the job time provisions to update their skills (while still being supported by the employer and when appropriate by the government) is not easy or natural but essential for the long term success of all those involved.

While individuals' mindset and efforts are key to being able to truly embrace lifelong learning, another key element is to identify sound ways of planning for job transitions and develop options for getting the required reskilling and upskilling delivered and financed. As the World Economic Forum has laid out in its January 2018 report on Towards a Reskilling Revolution - "not every displaced coal miner will be able to become a software engineer". So how might one actually go about assessing theoretical job transition options? Towards a Reskilling Revolution showcases an embryonic data driven approach that could help all involved to take a focus and proactively manage upskilling, reskilling and job transition. The approach proposed is undertaken through a leadership (employer/ government) lens and an individual (employee) lens.

Under the leadership lens, the approach can be used to maximise productive redeployment opportunities for workers by identifying priority job transition pathways, with a view to optimising the collective outcomes for the economy or a specific industry.

The individual lens maps out job transition options from selected roles and measures the size of the opportunity space for workers by keeping in mind their personal strategy and preferences.

Now could be a good time to overlay "rail lens" to this to evaluate reskilling/upskilling pathways and job transition opportunities that would make both the rail sector and its people stronger.